Stop Using Tablets/Phones/Computers before You Go to Bed!

According to some smart Harvard people, anyway.

Because evolution never expected humans to develop ways to produce light, our bodies are wired to assume that nightfall is all dark.  A December 2014 study from PNAS states that the light from a back-lit computer screen degrades sleep hygiene from a hormonal level.

The study took 12 health young volunteers, admitted them to the hospital for 14 days, and – you guessed it – made them use computers!  But because it’s science, the volunteers can’t just browse any web site.  They were randomized to either read books on printed paper or read books on an “light-emitting device.”  Then hourly (yes, hourly) blood samples were drawn to measure melatonin levels during certain portions of the study.  They basically found that decreased melatonin levels were associated with reading on these “light emitting devices.”

It all comes down to endocrine physiology, really.  Melatonin is the hormone contributing to the regulation of circadian rhythm.  In fact, sometimes melatonin can be used as a sleep aid for people who have trouble sleeping. Normally, the body inhibits melatonin production in the morning as a response to light (hence our usual habit of opening the curtains in the morning).  The type of light that matters most is those with short wavelengths (the sun actually makes very short wavelength lights well into the ultraviolet spectrum, but those in the visible light spectrum matter too).  LCD screens happen to produce higher proportion of shorter wavelengths of light as well.

For example, iPads have a screen spectrum like below (“New iPad” refers to the third-generation iPad from 2012): 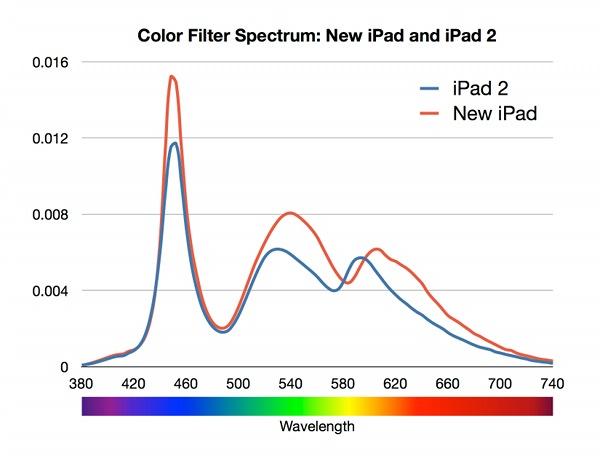 The study explains that this doesn’t just affect sleepiness, but also changes the length and timing of each sleep cycle including rapid eye movement (REM), and therefore affects our sense of wakefulness the following morning.

In other words, it’s a double whammy – First we lose sleep time because we see something interesting on that iPad.  Then, when we finally go to bed, the quality of sleep is affected by the light coming from the device itself!

Interestingly, the same isn’t necessarily true for incandescent light bulb or other sources of light, which have wavelength characteristics different from that of a computer screen.  These smart physicists put together a graph showing that a standard light bulb emits mostly red-to-yellow spectrum light.

The jury is still out about whether front-lit e-readers such as the Kindle Paperwhite and Kobo Glo have the same effect as the back-lit devices used in this study.

Thanks to a tip from @arjunsharmarad, a piece of free software called f.lux is available for PC, Mac, Linux, and iOS that turns down the blue wavelengths of your monitor based on the time of day.