The Value of Knowing What Lies Ahead

When I was in 8th grade, my English teacher wanted to give everyone a book to take into high school.  She had a cardboard box full of various books. There was literary fiction like Toni Morrison.  There was a memory aid for American presidents. But I came to class really late that day, so by the time I went up to the box, there were only a few books left.  I had the great choice between Billy Budd (dryest. book. ever.), Atlas Shrugged, and this book called Getting Things Done.

I picked up Getting Things Done because Atlas Shrugged didn’t fit in my bookbag.   It would be years before I realized that self-help productivity books is in itself a major genre of nonfiction.  At the time it just didn’t make sense why anyone would need such pathologic level of compulsion to keep things organized.

Since this January, I started in a chief resident role in the radiology residency program.  Having to keep track of a long list of pending issues, my email became quickly inundated with a large number and variety of topics (logging out of email at the end of the day never felt more satisfying).

While trying to keep abreast of research, personal life, and hobbies, I started really digging into the importance of task management.

It turns out that todo lists have been around for quite a while.  Here’s one from Benjamin Franklin: 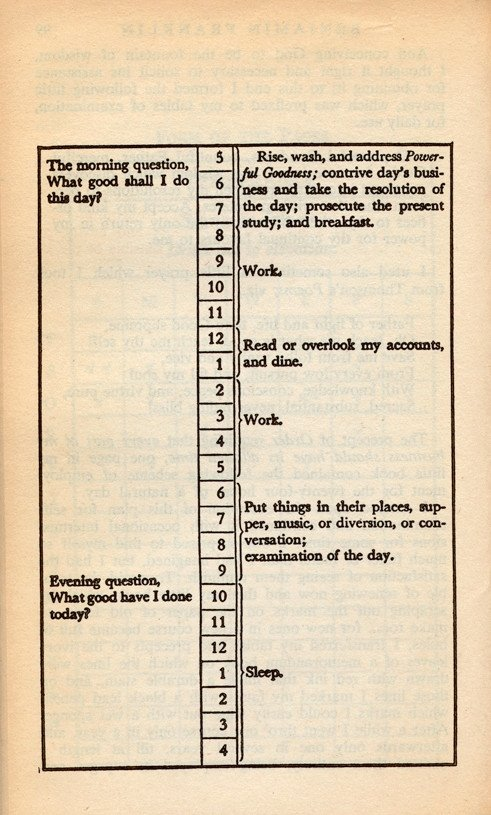 In the very beginning, there was paper lists. Then there were digital lists. Some people prefer very simple tools.  Gina Trapani, the founder of Lifehack.org favors what she calls Todo.txt, where the entire list is just a text file.  Some prefer a simple but dedicated web-based software like Google Tasks.  Others prefer beautifully presented ways of keeping a list of tasks like Wunderlist.

Do you also need something to keep track of your administrative duties, the Core Exam, academic projects, and personal life?  How do you manage your todo?

This entry was posted in Figure Stuff Out, Technology and Informatics and tagged informatics, Organizational tools, Personal Management, Productivity. Bookmark the permalink.