Is Radiology Ready for The Cloud?

Taking radiology to the cloud is not a new concept. It has already been discussed here and here, with lowest hanging fruit use-case being cross-institutional image sharing.

The excitement for cloud is certainly abuzz in the non-healthcare market. Several days ago, @TheEconomist tweeted a message ending with “the whole IT business will change.” They were referring to the maturing migration of technology into the cloud.

What caught my eye was not the tweet itself, but the accompanying graphic, illustrated by Satoshi Kambayashi. 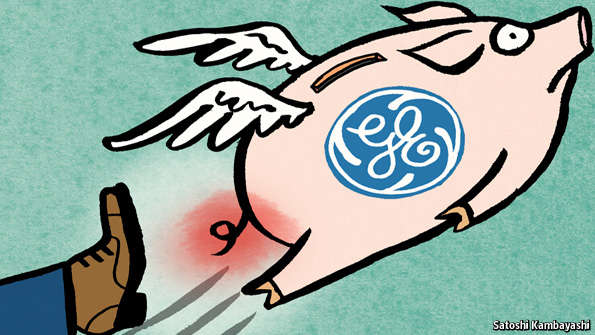 From @TheEconomist. Copyright belongs to illustrator

A winged piggy bank with the General Electric logo receives a boot in the loin, eyes wide open with surprise as if he didn’t see it coming at all. General Electric, of course, is one of the biggest vendors in radiology hardware.

So are radiology practices ready to kick GE, too?

Picture Archiving Communication System (PACS) is one of the most critical pieces of software in a healthcare enterprise’s electronic medical record. The reason is volume and bandwidth – (1) Radiology’s massive storage requirement is second only to pathology, and (2) radiology far more than any other department consumes a massive network bandwidth during daytime work.

Ironically, PACS is often bundled with their hardware counterparts, PACS client and server hardware are often included as upgrades when an institution buys new scanners rather than as a core competency.

Cloud-based radiology PACS solutions are the startup companies that specifically design the software for radiology archiving and display. That is, they are software companies. Many of them do not even own the hardware used to store data, instead opting to source computing power from a third-party, goliath cloud provider (Amazon, Microsoft, Google, IBM).

By removing a healthcare system’s need to store and maintain their own complex array of dedicated hardware, cloud solutions promise lower cost, higher mobility, and improved standardization. Indeed, vendors are touting the same diagnostic-quality viewer client on web browser and mobile phones as one would a dedicated workstation.

With new power comes new responsibilities. The high-stakes patient care means healthcare is not yet ready for cutting edge technology the way the rest of the world is. Although Amazon, Microsoft, Google, and IBM are successfully disrupting hardware manufacturers like GE, they have so far shied away from healthcare, and for good reasons.

These are some of the problem a cloud solution must solve to take root in radiology:

When The Economist argued that cloud services will revolutionize the technology industry, they were referring to the explosion of cloud-based solutions as companies stop buying expensive dedicated hardware and start relying on CPUs and hard drives they cannot see – up in the cloud. Amazon – the largest provider – will be releasing its cloud service earnings in its 4/23 report, for the first time in a decade.

Wide adaptation of technology in technology sector generally takes more than decade to in healthcare (case in point: Google’s IPO was in 2004, and full search-based access to EMR is still a work in progress today). I hope for the day when I can contribute to my patient’s care using the same sophistication of technology as one does catching a ride.

This entry was posted in Radiology Innovation and Quality, Technology and Informatics and tagged Cloud Computing, PACS, Radiology, Technology. Bookmark the permalink.